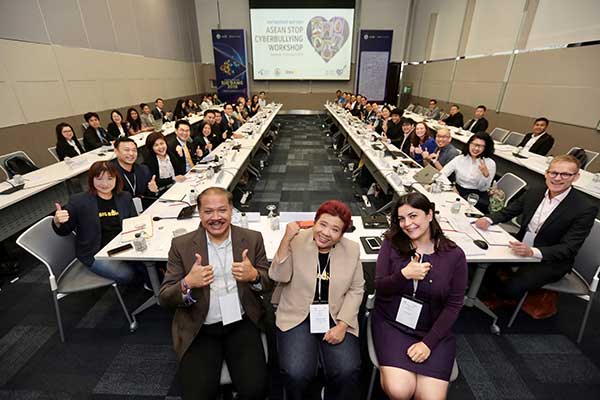 Following the First ASEAN Stop Cyberbullying Workshop hosted by Telenor Group and Thailand’s Digital Economy Promotion Agency (depa), more than 50 delegates from the public and private sectors, including government, industry, international and non-profit organisations across the Association of Southeast Asian Nations (ASEAN) contributed their views and expertise on how the region can work together to combat cyberbullying.

Elisabeth Biering, Head of Sustainability at Telenor Group, said bullying among youth and children is an age-old issue across the world, but with the exponential popularity of social media and unprecedented access to the Internet today. Cyberbullying has taken on a darker, more urgent dimension. Parents, schools and governments are struggling to understand and take steps to curb the rising number of cyberbullying incidents, which has even led to tragic consequences. For example, a 2018 study has shown that cyberbullying makes young people more than twice as likely to self harm or attempt suicide.

As nations across Southeast Asia and across the world form and establish their national frameworks and initiatives to embrace digital technologies and platforms, their citizens’ ability to safely use the Internet is an increasingly urgent priority to address. Thailand, as the 2019 Chair of ASEAN, has indicated that promoting safe ICT use by children will lay a solid foundation for the future, enabling the growth of digital societies and economies.

“We have become digital people, whether we like it or not. 92.5% of Thai children are on social media, some from as young as two years old. This digital activity makes them vulnerable to cyberbullying, and the risk of being exposed to bad language, fake news and sexual harassment. In Thailand, the Digital Economy Promotion Agency (depa) has a mandate to promote and develop this new digital economy and society that we are in. Creating a safe internet for children is one of our key priorities,” said Dr. Kasititorn Pooparadai, Senior Executive Vice President, Strategy and Management Unit at depa.

Cyberbullying itself is a complex and broad issue which crosses social, economic, governmental and even legal boundaries, but this challenge was taken up by the delegates at the forum who openly discussed their efforts, experience and obstacles to overcome cyberbullying.

From the discussions and panels, three clear takeaways emerged:

While each nation develops initiatives and programs tailored to their own systems and structures, there is a clear need for harmonisation of legal and regulatory frameworks across ASEAN. The Internet recognises no borders or boundaries but the same issues might be dealt with very differently in neighboring countries. There should also not be over-reliance on laws and legal enforcement to resolve such issues, and a collaborative framework needs to involve all levels of society – from parents to schools, from private institutions to non-profit organisations, and be supported by all public sectors.

Interventions and solutions must address the voices of affected children and youths, and the most effective way to ensure this is to identify and grow the right group of research pool. Identifying the right group of people to listen to provides for more representative and quantifiable results, such as patterns and frequencies of cyberbullying incidents, to guide any decision-making process. It also allows us to identify more accurately the channels and platforms that are more suited to directly engage at-risk children and understand the issues they face, while avoiding more adult-centric concerns and perspectives. These solutions should be driven by governmental agencies and strongly supported by academics and NGOs who have more expertise and past experience to contribute.

Inculcating and building up digital resilience among children and the youth should be incorporated as foundational objectives of national curricula and programmes. Forms and channels for cyberbullying are constantly shifting and evolving – for example, while we see this happening often on social media, online games are also being used, as cyberbullies hide behind avatars or develop codewords to single out their targets. It thus becomes imperative to equip children with core skills to recognise, respond and if necessary, recover from cyberbullying incidents they may encounter.

Vicki Shotbolt, CEO & Founder of Parentzone, a UK-based organization that works with parents, schools, governments and businesses to study, understand and address the impact of emerging technologies on young people, also highlighted the shared responsibilities and collaboration needed to build online resilience.

“Resilience is built through two main things – the quality of parenting that they receive and a positive attitude to technology which is something that can be mastered. In the UK, ParentZone has worked with the UK government and there are now working groups made up of policy-makers, government departments, experts, academics and NGOs, all working together to launch a framework and allocate the right resources to promote digital resilience,” she said. She added that the campaign was led by the UK Prime Minister’s office, which sent a clear signal that it was a priority for the whole country.

While the issues were varied and challenging, the ASEAN Stop Cyberbullying Workshop ended on a positive note with delegates committed to further partnerships and future dialogues on their efforts to overcome cyberbullying in their own nations.