HONOR has launched the latest and most powerful addition to its X-series line-up ‘HONOR 8X’. From 5X, 6X, 7X and now 8X, HONOR X-series phones are always dedicated to providing the most value to serve customers, with cutting-edge technology, features and style, but with an astoundingly accessible price.

At the competitive price point of 7,990 THB, HONOR 8X is a pivotal landmark in the series, extending the reputation of an exceptional value proposition that no flagship smartphone can match.

In HONOR 8X, customers get a top-end configuration of a 6.5-inch Notch FullView Display with a 91% screen-to-body-ratio and chip-on-film (COF) technology along with a comprehensive list of top features.

Aesthetic design in a slim, elegant body made possible by chip-on-film (COF)

HONOR continues to push the envelope, endeavoring to offer the maximum flagship features possible for the budget minded consumer.

HONOR 8X is the first smartphone ever to come equipped with a new generation eye comfort mode certified by TüV Rheinland – a feature which can reduce blue light radiation emitted by the screen to prevent eye fatigue. HONOR 8X has dual-lens 20M + 2M rear and 16M front facing cameras. The cameras possess AI which recognizes 22 different categories and 500 scenarios in real-time. The AI technology optimizes camera settings and enhances photo quality based on what users are shooting.

The new night shooting mode enabled by AI technology eliminates the blurring of photos when taking night shots under a maximum 6-second exposure, even with a shaky hand.

Whether you’re a professional or an amateur photographer, with HONOR 8X anyone can create impressive night shots. Altogether, it’s a smartphone that lets you easily take the best photos regardless of setting or lighting – so you can stay in the moment.

The octa-core Kirin 710 chipsets deliver excellent performance in HONOR 8X. Compared to the previous generation, the CPU single-core performance has increased by 75%. HONOR 8X has a Mali G51 GPU, which is enhanced by revolutionary GPU turbo.

The overall GPU performance is increased by 130% compared to the previous generation, providing exceptional experience to demanding gamers.

HONOR 8X has 128GB ROM and supports an expandable microSD card up to 400GB. The smart user interface EMUI 8.2 not only keeps the system running smoothly, but also brings new features such as facial recognition under dim light and fun augmented reality (AR).

HONOR 8X features intelligent power saving technology and a 3750mAh battery, which can last for more than one day on a single charge. 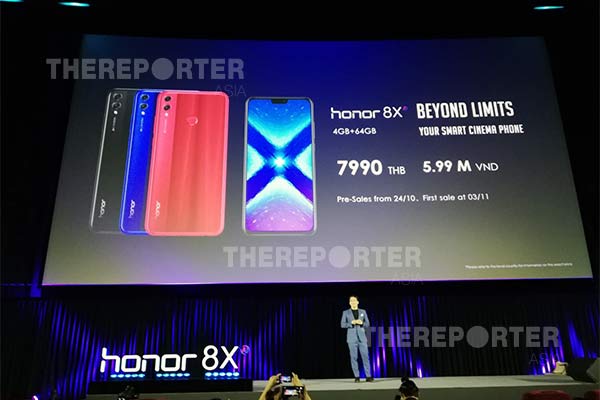 Mr. Akin Li, President of HONOR South East Asia, said: “With the newly unveiled HONOR 8X, HONOR is setting out to hit new benchmarks in terms of balance between value, design and performance.

HONOR 8X doesn’t just meet the needs of our customers, it represents a stunning leap forward in smartphone technology, tearing down old conventions on what is possible, while keeping a strong focus on design aesthetics. HONOR 8X indicates HONOR’s willing to meet the needs of young generation from every .

At the event, HONOR also released a new surprise for the Thailand market, the first wearable device, HONOR Band 4 Running. The versatile, ergonomic wristband comes in two colors and is ultralight. 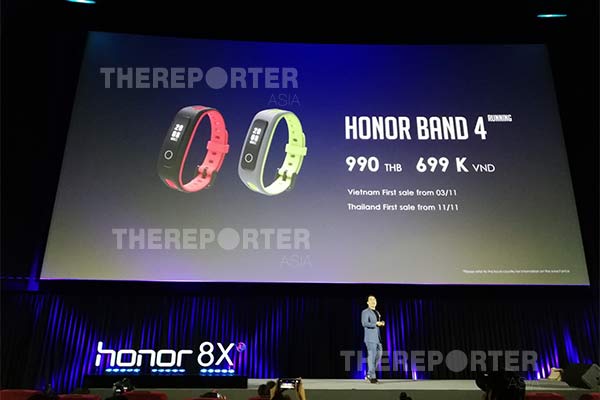 HONOR band 4 running has more than 20 functions including sleep monitoring, alarm and is waterproof to a depth of 50 metres. The band links perfectly with HONOR 8X and can support a new healthier lifestyle for the young at heart.

With great artworks like Wake Up Chanee, Friend Zone, Yutthakan Salat No, Lee is great popular among young people and good looks. Lee is the Perfect X, is because Lee just like HONOR 8X, has integrated ability, representing the choice of the young generation. In this launch event, HONOR also announced to be the Official Smartphone of the AFF Cup 2018. By cooperating with AFF Cup 2018, HONOR tries to get closer to young generation. Look forward to more exciting competition in AFF Cup 2018 from 8th November.